At Wanna Get Out Bail Bonds on Oahu, one of the questions we get on a regular basis is how a judge makes the decision about when to grant bail. In some instances, a person who gets arrested is eligible for bail; in other instances, that’s not the case. So what factors are taken into consideration?

As a matter of fact, that’s the topic of today’s blog, so if you’ve had this question before–or if you’re wondering it now–the good news is that we’re here to help shed some light on the situation. Keep reading to learn more!

When Will a Judge Deny Bail?

One of the first things a judge will consider is whether or not the person who was arrested seems like he or she might run. In instances where this person poses a flight risk, there is a very good chance that the judge will deny bail.

If the Crime Was Violent in Nature

Extreme circumstances will sometimes mean that the judge will feel better about keeping a person behind bars. For example, murder is a crime that is so severe that the odds that a person would flee after getting bailed out go up quite a bit.

If They Are Disrespectful to the Judge

Although it is rare, in instances where the person who was arrested is disrespectful or rude to the judge, that person is denied bail. As you can probably imagine, it doesn’t reflect particularly well on a person when he or she decides to make enemies with the person who holds their fate in his or her hands.

If They’ve Skipped Bail Before

This one almost goes without saying, but if the person has skipped bail in the past, the judge is much less likely to grant bail to that person. After all, if they’ve done it before, there’s a pretty decent chance they would consider doing it again.

If They Pose a Threat to Themselves or Others

Lastly, if the person who was arrested seems like he or she might endanger others or cause harm to him or herself, the judge will keep them in jail in order to make certain that they are monitored. At the end of the day, the judge doesn’t want that person to get hurt or hurt someone else, so this option just makes sense. 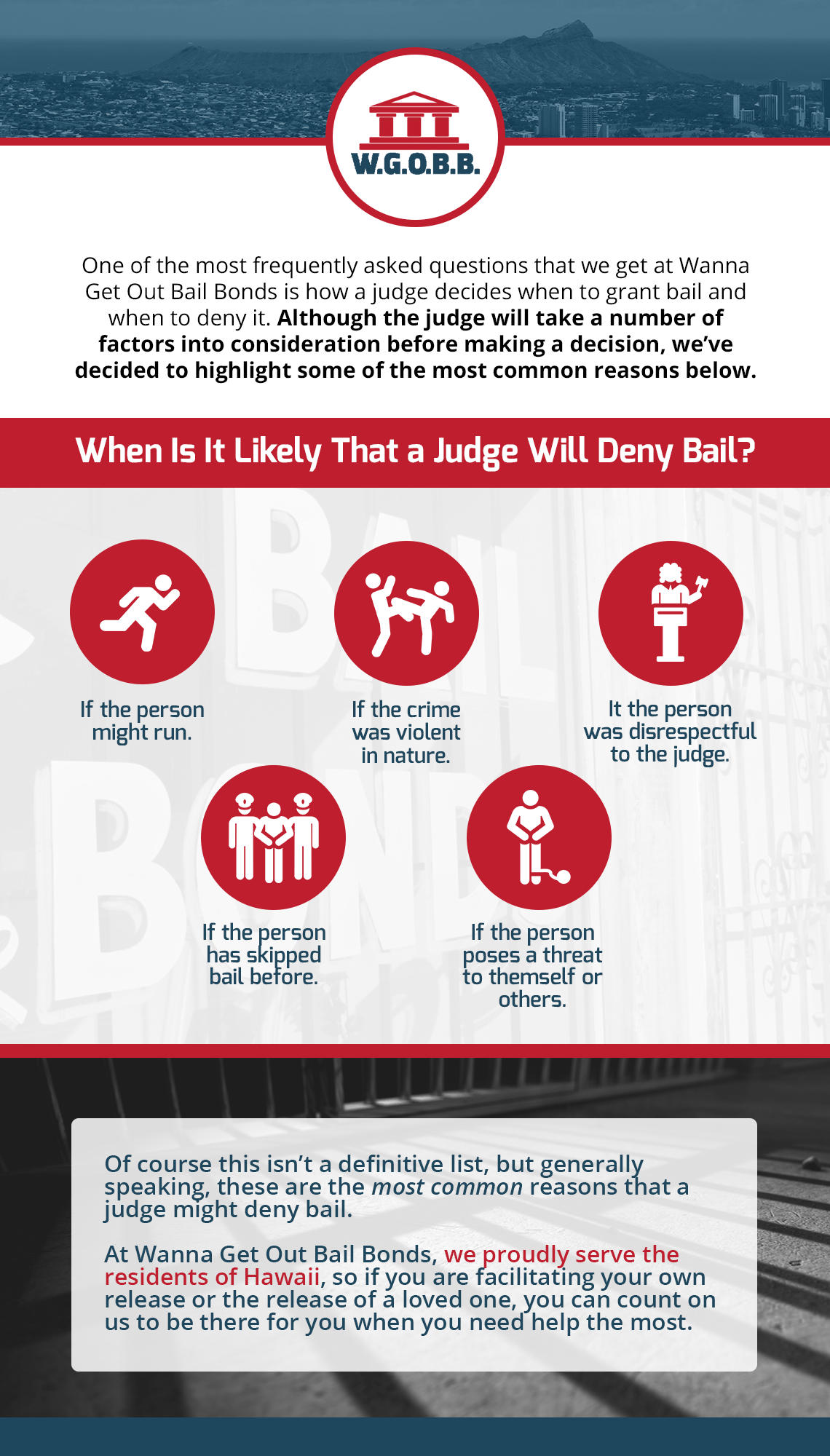 Put Your Trust in Wanna Get Out Bail Bonds

At Wanna Get Out Bail Bonds, our goal is to be a comprehensive source of information for our clients. You can learn more by checking out our list of frequently asked questions about bail bonds or taking a look at our blog archive to see some of the topics that we’ve taken an in-depth look at in the past.

If you’re looking for a bail bond company to help you bail yourself or a loved one out of jail, look no further. Contact us today to get started, because we’d be happy to answer any questions you may have and make sure that you’re well taken care of.